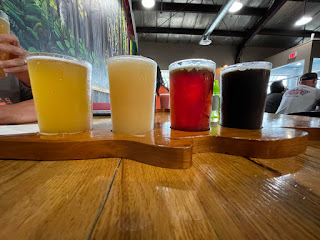 For this one, it was Flight Time. Four 4 oz. beers. It's a good way to get a sample of a few beers that you think you might like.

Not a fan. Not sure why. I think it was pretty much on style but it just didn't rock my world.

This was better. I do love a good Saison. This one had a few surprises mixed and I don't think I could tell you what they were. It was good though.

Blam! Malt in your face. This was great. Heavy malt. Kinda sweet but definitely bready with a little bit of toast. The scotch comes through but isn't overpowering. I'd drink this one again.

Beer #4: Guardians of the Beam

Maple, bourbon. Another malty beer. This was great and I was thrown off by the wild rice in the name but that didn't come through much for me at all. I can imagine this being a solid brown ale but improved greatly with the barrel aging.

If you haven't checked this out yet. It\"s an awesome project. Click here to read about it. Klockow's take is solid. It's still aging but it was definitely at least on par with the samples of this beer that I've tasted and I'm not a huge fan of the style.

The best part of this sample is the brewer remembered my friend who asked about it the last time he visited and brought us out a sample from the back. This beer wasn't on the menu but wanted us to give it a taste. Knowing people comes with perks...

His words, typed insecurely. Scared to peek around the corner of your eyeball. To be consumed by your brain, judged for their quality or lack of. A constant refrain paralyzing each finger as it moves on the keyboard of his brain. The words spoken in his classroom, Heard by growing minds forming opinions of the world. Everyday. Lasting a lifetime in the brains of the next generation. Intentionally measured meanings and tones striking a hopeful lesson for all. A constant refrain paralyzing the mind speaking his lessons. A conversation with a friend replayed in his head a hundredth time. Jokes misinterpreted, potentially offending. Viewpoints expressed casting a new questioning opinion. Stories told among the group, the relevance to the thread lost, questioned, ignored. A constant refrain paralyzing his words and drawing him more into himself. A thesis paper researched to death. The paraphrasing misconstrued. Connections to the core lost among the citations. Conclusions drawn like a rubbe